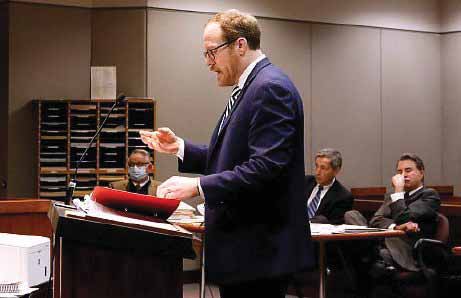 Come Jan. 1, pretrial cash bond will be abolished as part of the Illinois SAFE-T Act, a move that has triggered outcries, varying interpretations and lawsuits.

Even so, debate over the measure has resurfaced in recent months as the law has become a partisan flash point in the ongoing November elections. Crime and safety have been issues in many political campaigns, and Republicans have used the law in an attempt to portray their Democratic opponents as soft on crime.

The new law, however, does not mean jail gates will swing open and alleged murderers and rapists will walk out as opponents of the law insist, said Richard Kling, a clinical professor of law at Chicago-Kent College of Law.

There will not be a “mass exodus,” and it will not be a day of “The Purge,” a reference to a movie in which all crime is legalized for 12 hours.

Instead, those charged with a crime no longer will have to provide the court system with money in order to secure their release while awaiting trial.

“It is much ado about not a whole hell of a lot,” Kling said.

While it’s clear access to money no longer will determine who sits in jail while waiting for their case to be adjudicated, plenty of questions remain about how the new system will work, including under what circumstances someone can be detained before their trial, and whether communities will be more or less safe after its implementation.

A nonpartisan task force formed under the Supreme Court has identified unclear or contradictory sections of the bill that it said lawmakers should reconsider before Jan. 1, and Pritzker on Friday said he is considering changes to clarify provisions related to the end of cash bail in Illinois. His Republican challenger, state Sen. Darren Bailey, continues to push for a full repeal.

Under the new law, it will be up to prosecutors in many cases to file petitions for detention and judges to decide, based on the circumstances of that case, if someone is a threat to a specific person or the community at large or is a flight risk, Kling said.

Some charges mean someone is automatically eligible to be detained. That includes Class X and gun-related felonies such as aggravated battery to a child causing great bodily harm, attempted murder, any aggravated sex offenses and gun charges, according to McHenry County State’s Attorney Patrick Kenneally and the statute language.

For instance, Mark Alex, 58, of Crystal Lake, charged last year with the attempted murder of his estranged wife, could have been released soon after his arrest when a judge initially granted him a $2 million bond.

A week later, prosecutors argued and won a motion that he be held without bond, but had he been able to post $200,000 in those first few days, he would have been released from jail.

Under the new law, he would have been detained based on the violent nature of his crime and the threat against his estranged wife. His access to cash never would have been a factor in Alex’s remaining in jailtime, Kenneally confirmed.

But Kenneally, who along with the top prosecutors in Will, Kankakee and Grundy counties filed lawsuits against Pritzker challenging the law, said he thinks it poses a threat to crime victims and the community.

He’s among the many prosecutors in the state who have warned that the system replacing the current pretrial detention language is too limiting for judges.

According to the law as written, offenses for which someone can be detained include “forcible felony offenses” where probation is not a potential outcome, Kenneally said. That leaves a lot of serious offenses, such as second-degree murder, arson and carjacking, where probation is a possible sentence and, therefore, someone cannot be detained before their trial unless prosecutors can prove they’re a danger or a flight risk.

Kenneally said proving someone is dangerous and should be held in jail “requires a very exacting standard.”

“It is unrealistic,” Kenneally said.

Under the new law, with violent crimes where probation is a potential outcome, prosecutors would need to file petitions arguing the person is a threat to a specific person or the community at large, and a judge then would decide whether that person can be detained, Kling said. In low-level nonviolent crimes, a judge would need to determine whether the person is a flight risk in order for them to be kept in jail.

Defense attorneys such as Robert Deters, who represents clients in McHenry County and other jurisdictions, said most felony defendants historically have been released anyway if they were able to post 10% of a cash bond.

“Being confined to jail prior to trial simply because you cannot afford your freedom does not achieve justice,” Deters sad. “Everyone who will be released under the SAFE-T Act could always have posted bond before. We can still keep people safe by putting strong conditions of release on people like curfews, drug testing, GPS monitoring and other restrictions. I have no doubt there will be difficulties in implementing this new program, but progress is often rocky.”

However, another problem Kenneally said with allowing defendants to be out of jail while awaiting trial is what to do if they do not return for court appearances. As the system is now, if someone does not appear for a court date, the judge issues a warrant for their arrest. Under the new law, the only measure available is to issue a summons, which does not carry the same weight as an arrest warrant, Kenneally said.

Kenneally also has questions about whether the law applies retroactively and how to handle those currently out on cash bond.

Kenneally called the new law a “wrecking ball” to the cash bail system and said the timing of passing this law was an “ambush.”

“A group of activists wrote this law and legislatures passed it during a lame duck session, and they didn’t know what was in it, and now we are stuck with this nonsense,” Kenneally said.

A bill filed last week by Champaign Democrat Scott Bennett, a former prosecutor, would clarify that the end of cash bail applies to those arrested after Jan. 1, 2023, among other changes.

In Lake County, State’s Attorney Eric Rinehart, who supports the new law, said that althought other state’s attorneys are digging in their heels and filing lawsuits, prosecutors in his office are preparing for the new law. They are in the process of identifying detainees in their county jail who would be released under the new law and writing petitions for detention for the most dangerous.

Kenneally said his prosecutors will do the same, but the judge ultimately has to follow the new law, he said.

“I supported the SAFE-T Act,” Rinehart said. “I think it’s an important overhaul to a system that has relied on cash and should be relying on safety assessments. … Violent criminals will be held under this new detention system, and I am proud to support a new detention system.”

Under the new system, decisions such as whether to hold a defendant will be based on “safety to the public as opposed to how much cash is in somebody’s wallet or who has access to a family member with cash or criminal associates with cash,” Rinehart said.

Rinehart said he has been focused on working with judges, public defenders, the jail, the circuit clerk and prosecutors to identify and write petitions “to make sure we hold violent criminals up until and beyond Jan. 1, 2023.”

Rinehart pointed to a recent Lake County case in which a man faced child pornography charges. He posted $20,000 and was released. Under the new system, this man would be considered a risk to the community and would not have been able to post cash bond in order to be released.

In another example, Rinehart noted Sheldon Brown, while on bond in Cook County on a weapons’ offense, murdered someone in Waukegan. Brown recently was convicted in Lake County and sentenced to 65 years in prison, according to Lake County court records.

“Under this system, [Brown] would not be released because we hold weapons offenses,” Rinehart said, noting that under the cash bond system, Brown had been on the streets, where he went on to kill someone.

George Kililis of KRV Legal in Crystal Lake has practiced law since 2004, defending clients in various counties but primarily in McHenry County. He said those who oppose the new law are spreading “misinformation.”

“Defendants accused of forcible felonies can still be held in pretrial custody if a judge determines that they are a flight risk, in violation of parole or probation, or if they are on pretrial release on previous charges,” he said. “There has been hysterical claims that the act will usher in a ‘Purge’ era, where criminals roam our streets and the police cannot do anything about it. This is just plain nonsense.”

Kililis said his stance comes from his “love for our Constitution and its fundamental tenet that we are all presumed innocent until proven guilty.”

The current cash-based system, he said, creates “historic and systemic injustices, but more importantly a system where the state has undue power over our most cherished fundamental right of freedom.”