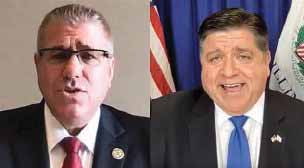 Gov. JB Pritzker is considering changes to the SAFE-T Act criminal justice reform to clarify provisions related to the end of cash bail in Illinois, while his Republican challenger, state Sen. Darren Bailey, continues to push for a full repeal.

The candidates shared their thoughts Friday on those and other issues during a virtual forum organized by the Illinois Associated Press Media Editors. Questioners included representatives of Shaw Media, the Daily Herald in Arlington Heights, the Springfield State Journal-Register and Capitol News Illinois.

Pritzker frequently has said he believes cash bail must end in favor of a system that prioritizes an accused person’s risk of reoffending or fleeing prosecution, and the SAFE-T Act does so. But nearly all the state’s prosecutors have warned that the system replacing the current pretrial detention language is too limiting for judges.

Inaccurate claims surrounding the SAFE-T Act have been rampant, with Bailey stating Friday he believed the intent of it was to let people who are being held in lieu of bail out of jail once it takes effect. Nothing in the law says that will happen, although an Illinois Supreme Court task force has encouraged lawmakers to clarify language regarding what happens Jan. 1. “And so there are proposals that have been made to make clarifications in the law to make sure that people understand very well that, no, this law does not create non-detainable offenses. And that, no, people are not going to be let out of jail on Jan. 1 – that’s not what the law does,” Pritzker said.

The governor stopped short of endorsing a bill that would make changes to the SAFE-T Act that was filed last week by Champaign Democrat Scott Bennett, a former prosecutor.

But he said it contains “simple to understand” clarifying language. Bennett’s bill, among other things, would clarify that the end of cash bail applies to those arrested after Jan. 1, 2023.

“I haven’t gone through every provision that he has proposed, but I know that Senator Bennett, who was a prosecutor, a Democrat from Champaign and Vermillion counties, is somebody who is very careful in the way he approaches issues like this and I’m always open to working with people who are rational and reasonable in their proposals,” he said. But lawmakers aren’t scheduled to return to the Capitol until Nov. 15, a week after Election Day.

Bailey, a farmer from downstate Xenia, said he’d like to see the governor call a special session ahead of the election to consider SAFE-T Act changes. But he hasn’t proposed any in bill form, and he said he’d favor a full repeal. He pointed to several endorsements from law enforcement groups.

“So if I were governor right now, and if I were sitting here and people across this state were as concerned as they are about their safety, I’d call a special session right now,” Bailey said. “It’s an election year, Gov. Pritzker. You’ve got a perfect opportunity to have a little political ploy here. Call session back in and let’s talk and let’s come up with solutions.”

Bailey’s opening remarks focused on public safety, lamenting the volume of shootings in the city of Chicago. He said “law and order’s out of control,” and he’d bring back “hope” for Illinoisans by addressing it.

“Illinois has the most restrictive gun laws in the nation. The problem is those laws aren’t being honored and they’re not being followed,” Bailey said.

Pritzker countered that the FOID law gives Illinois more background check authority than does federal law. He also argued in favor of banning assault-style rifles both statewide and nationally.

Pritzker criticized Bailey as a “Trump extremist” in his opening remarks while also focusing on his record of paying down state debt, increasing education spending, erasing a bill backlog, raising the minimum wage and protecting abortion rights.

He touted a $1.8 billion tax relief plan that will send direct payments to most Illinoisans, eliminate a state grocery tax for a year, put off a gas tax increase until next year and expand the state’s earned income tax credit.

It’s a proposal Bailey supported despite voting against the general budget framework every year he has been in office since 2019. He contended that Illinois hasn’t had a balanced budget in 30 years, criticizing Pritzker for growing state spending during his term.

Bailey contended the 2019 operating budget was $34 billion, although records from the Commission on Government Forecasting and Accountability show Illinois took in base revenues about $39 billion in fiscal 2019, topping $40 billion with treasurer investments and inter fund borrowing. State spending grew to $46.5 billion in the current operating budget, fiscal 2023.

Bailey didn’t identify planned budget cuts but repeated his intent to install a new budgeting method to give more scrutiny to year-over-year spending.

“My administration will enact a zero based budget where we will place knowledgeable, honorable, hardworking men and women as agency heads and they will begin to go to work with the zero-based budget and they will account for every dollar that’s going to be spent,” Bailey said.