Local author pens novel on the future of baseball
McHENRY 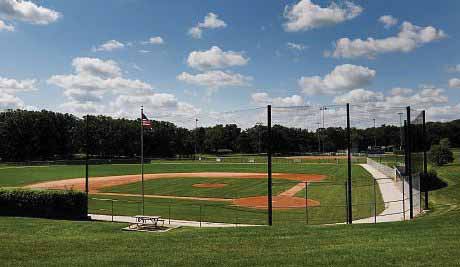 Gregory Shaver – gshaver@shawmedia.com
The rebuilt baseball field in Emricson Park on Sept. 7. The challenge of preserving local baseball led to McHenry author Douglas Peterson writing a speculative fiction novel about the future, “The Death and Resurrection of Baseball.”


Imagine an America, over 100 years into the future, ravaged by a second Civil War; what will become of the great American pastime in such a scenario? If baseball were ever to disappear from the cultural landscape, could such an intricate and historic sport ever be recovered?

This is the premise of McHenry author Douglas Peterson’s new book, “The Death and Resurrection of Baseball,” a work of speculative fiction set in McHenry that asks these questions. Although the book isn’t meant as a strict metaphor, the precarious future of baseball and our country are rooted in today’s cultural landscape, Peterson said.

“Several years ago I was reading an article about kids games that went extinct before the Civil War,” Peterson said. “There’s no memories of these games, they’re lost to history. I thought about the decline of sandlot ball and the fact that in-house leagues don’t have as many teams, and it all came together: What if baseball were to die as a sport?”

According to a synopsis sent to the Northwest Herald, the story involves a 12-year-old boy who lives in McHenry in the year 2166. The boy becomes “an instrument towards the recovery of a long-lost part of our culture from before the second Civil War,” Peterson writes in the note.

Peterson, who has lived in McHenry since 1992 and writes under the pen name William R. Douglas to honor his late father, said the primary factor in his writing the book is his deep love of baseball. Peterson coached his son and was the commissioner for his local church softball league.

While baseball is in no danger of going extinct today, Peterson cited several factors such as the popularity of soccer, video games and the continual decline of youth participation in baseball that should be cause for concern.

It’s not much fun if you can’t hit the ball. It’s easier to kick around a soccer ball.”

This is Peterson’s first novel, although he said he’s always had a love for writing. The book took him four years to complete.

Two literary influences Peterson cites as inspiring the work include David Aikman’s “Where the Almond Tree Blossoms” and William Forstchen’s “One Second After.” Peterson also said the book includes several “hat tips” to the movies “Field of Dreams” and “The Sandlot.”

“Overall I tried to make it entertaining,” Peterson said. “But I hope to start a conversation among readers and their families, about where we could be headed if we don’t relearn the art of getting along.”

“The Death and Resurrection of Baseball” was first published this past May; those interested in learning more about the book, including where to purchase it, can go to authorwilliamrdouglas.com.